Tall and athletic, with a blithe and etherial spirit and a masterful way in the art of understatement, David Podsiadlo, principal at Gus Design Group, is as Canadian as the furniture he designs, updated, minimalist, mid-century Canadiana, pieces with names like the Atwood Sectional and the Trudeau Sofa.

“Similar to Scandinavian countries, contemporary Canadian design is accessible to the rest of the world. Yet, at Gus we try not to create things that scream Canada—like lumberjack-check ottomans,” Podsiadlo offers, “…which might not be a bad idea, come to think of it,” adding after a pregnant pause. Intended as self-deprecation, the moment turned into one of inspiration.

For full text, click thumbnail or below continue below. 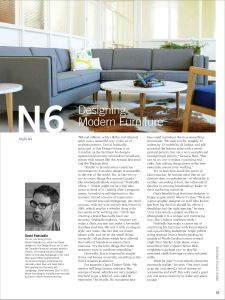 “I started Gus and Stylegarage, our retail concept, with my wife and my best friend in 2001, which may be a whacky thing to do but seems to be working out. I think that creating a brand has really been our success,” Podsiadlo explains. “Anyone can make a chair, anyone can make a five-sided stainless steel box. We mix it with an elegant style, our name, the fact that we return phone calls, and we do the small things correctly,” all qualities which have allowed the troika of founders to sustain their business. “It’s the little things that make someone want to purchase something.” Generally, Gus is inspired by simple forms and honest materials, according to the firm’s mission statement.For example: Gus’s Timber Table. “We used to sell large factory end-cuts, like stumps of wood, which were very popular but hard to get a hold of, and could be expensive,” he recalls. He wondered how Gus could reproduce them as something man-made. “We took acrylic, roughly 12 inches by 12 inches by 18 inches, and silk screened the bottom sides with a woodgrained pattern, but not a very complicated wood-grained pattern,” he says. Now, “You can sit on it or it makes a stunning end table. Just editing things down to the bare essentials, seems to be working.”Yet, to hear him detail the secret of Gus’s success, he sounds more like an art director than an upholsterer – of which he is neither. According to him, the value-add of Gus lies in creating breathtaking “looks” in their marketing materials.Gus’s humble lead furniture designer is happy to give credit where it’s due: “We have a great graphic designer on staff who knows just how big the font should be, where it should go and the right spacing,” he says. “Any time we do a project we like to photograph it in a unique and interesting way, like a Robert Smithson work.” Podsiadlo has made a career out of combining his furniture with found objects and eye-catching backdrops: bright yellow string sourced from a hotel’s parking lot outside of North Carolina’s semi-annual High Point Market trade show; vases unearthed from a Queen Street West neighbour’s garbage can; or playful, oversized chalk drawings on slate-coloured walls.Truth be told: “It’s extremely cheap but extremely stylish,” he says, “You don’t need to go out and spend a ton of money on accessories and stuff. You only need a good eye and some creativity to make any space unique.”