In 2011 Urban Capital was asked to lead the master planning of a 16 acre site at the western edge of Downtown Mississauga. The resulting community– “Garden City Mississauga” – could end up being a modern take on the original Garden City Movement from over a century ago.

For full text, click “View full size” in slideshow at bottom left or continue below 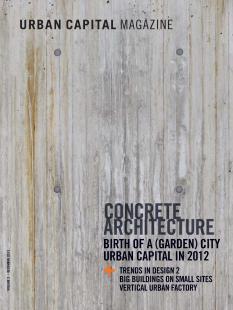 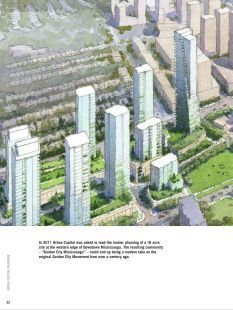 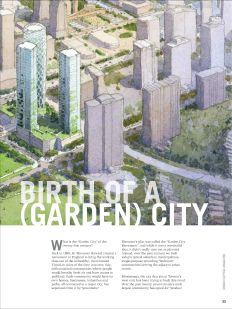 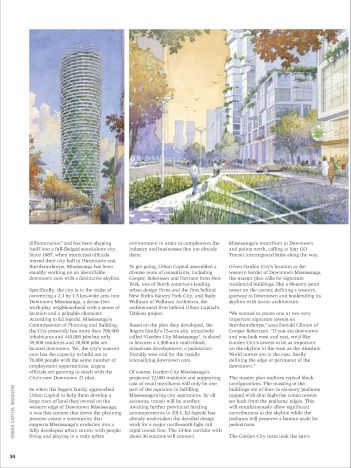 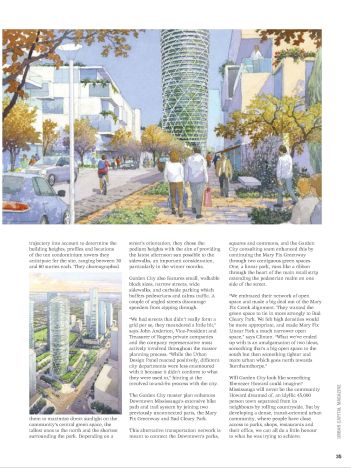 What is the “Garden City” of the twenty first century?

Back in 1898, Sir Ebenezer Howard created a movement in England to bring the working class out of the unhealthy, overcrowded Victorian cities of the time into new, tidy, self-contained communities where people would breathe fresh air and have access to parkland. Each community would have its own homes, businesses, industries and parks, all connected to a major city, but separated from it by “greenbelts”.

Ebenezer’s plan was called the “Garden City Movement”, and while it was a wonderful idea, it didn’t really turn out as planned. Instead, over the past century we built today’s typical suburban municipalities, single-purpose sprawling “bedroom” communities serving the adjacent urban centre.

Mississauga, the city that sits at Toronto’s west end, has been trying to buck this trend. Over the past twenty years Canada’s sixth largest community has opted for “product differentiation” and has been shaping itself into a full-fledged stand-alone city. Since 1987, when municipal officials moved their city hall to Hurontario and Burnhamthorpe, Mississauga has been steadily working on an identifiable downtown core with a distinctive skyline.

Specifically, the city is in the midst of converting a 2.3 by 1.5 km-wide area into Downtown Mississauga, a dense livework-play neighbourhood with a sense of location and a palpable character. According to Ed Sajecki, Mississauga’s Commissioner of Planning and Building, the City presently has more than 700,000 inhabitants and 440,000 jobs but only 35,000 residents and 20,000 jobs are located downtown. Yet, the city’s nascent core has the capacity to build out to 70,000 people with the same number of employment opportunities, targets officials are gunning to reach with the City’s new Downtown 21 plan.

So when the Rogers family approached Urban Capital to help them develop a large tract of land they owned on the western edge of Downtown Mississauga, it was this context that drove the planning process: create a community that supports Mississauga’s evolution into a fully developed urban centre, with people living and playing in a truly urban environment in order to complement the industry and businesses that are already there.

To get going, Urban Capital assembled a diverse team of consultants, including Cooper, Robertson and Partners from New York, one of North America’s leading urban design firms and the firm behind New York’s Battery Park City, and Rudy Wallman of Wallman Architects, the architectural firm behind Urban Capital’s Tableau project.

Based on the plan they developed, the Rogers family’s 15-acre site, tentatively called “Garden City Mississauga”, is slated to become a 4,500-unit multi-block, mixed-use development; a pedestrianfriendly west end for the rapidly intensifying downtown core.

Of course, Garden City Mississauga’s projected 12,000 residents and supporting cast of retail merchants will only be one part of the equation in fulfilling Mississauga’s big city aspirations. By all accounts, transit will be another. Awaiting further provincial funding announcements in 2013, Ed Sajecki has already undertaken the detailed design work for a major north-south light rail rapid transit line. The 23-km corridor with about 30 stations will connect Mississauga’s waterfront to Downtown and points north, calling at four GO Transit interregional hubs along the way.

Given Garden City’s location at the western border of Downtown Mississauga, the master plan calls for signature residential buildings, like a 60-story point tower on the corner, defining a western gateway to Downtown and bookending its skyline with iconic architecture. “We wanted to create one or two very important signature towers on Burnhamthorpe,” says Donald Clinton of

Cooper Robertson. “If you are downtown and you look west and east, we’d like Garden City’s towers to be as important on the skyline in the west as the Absolute World towers are in the east. Really defining the edge or perimeter of the downtown.”

The master plan outlines typical block configurations. The massing of the buildings are of four- to six-story podiums topped with slim high-rise condo towers set back from the podiums’ edges. This will simultaneously allow significant contributions to the skyline while the podiums will preserve a human scale for pedestrians.

The Garden City team took the sun’s trajectory into account to determine the building heights, profiles and locations of the ten condominium towers they anticipate for the site, ranging between 30 and 60 stories each. They choreographed them to maximize direct sunlight on the community’s central green space, the tallest ones to the north and the shortest surrounding the park. Depending on a street’s orientation, they chose the podium heights with the aim of providing the latest afternoon sun possible to the sidewalks, an important consideration, particularly in the winter months.

“We had streets that didn’t really form a grid per se, they meandered a little bit,” says John Anderton, Vice-President and Treasurer of Rogers private companies and the company representative most actively involved throughout the master planning process. “While the Urban Design Panel reacted positively, different city departments were less enamoured with it because it didn’t conform to what they were used to,” hinting at the involved to-and-fro process with the city.

This alternative transportation network is meant to connect the Downtown’s parks, squares and commons, and the Garden City consulting team enhanced this by continuing the Mary Fix Greenway through two contiguous green spaces. One, a linear park, runs like a ribbon through the heart of the main retail strip extending the pedestrian realm on one side of the street.

“We embraced their network of open space and made a big deal out of the Mary Fix Creek alignment. They wanted the green space to tie in more strongly to Bud Cleary Park. We felt high densities would be more appropriate, and made Mary Fix Linear Park a much narrower open space,” says Clinton. “What we’ve ended up with is an amalgamation of two ideas, something that’s a big open space to the south but then something tighter and more urban which goes north towards Burnhamthorpe.”

Will Garden City look like something Ebenezer Howard could imagine? Mississauga will never be the community Howard dreamed of, an idyllic 45,000 person town separated from its neighbours by rolling countryside. But by developing a dense, transit-oriented urban community, where people have close access to parks, shops, restaurants and their office, we can all do a little honour to what he was trying to achieve.