Claude Cormier is Canada’s landscape starchitect. A playful contrarian, he has brought Warholesque change to his field, a seismic shift. He has a penchant for props, rather than potted plants, in his whimsical, entertaining designs, like blue sticks, pink balls or an 11-meter 3-tiered maroon Victorian pedestal fountain (now welcoming guests at Toronto’s Four Seasons.) 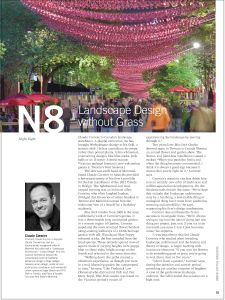 The down-to-earth head of Montreal based Claude Cormier et Associés provided a fast-paced survey of his firm’s portfolio for the last installment of the 2012 Trends in Design. The lighthearted and mad-capped evening was an intimate affair. Cormier, who often laughed loudest, divulged that his series of urban beaches in Toronto and Montreal earned him the nickname “Son of a Beach” by a Berkeley academic.

Blue Stick Garden from 2000 is the most emblematic work of Cormier’s genius. It was a three-month long conceptual garden in a remote region of Quebec. Cormier populated the rows of mixed flower borders along snaking walkways of a 1920s heritage garden with tall, Himalayan Blue Poppy coloured sticks, the hue sampled from the local species. These densely spaced rows of square reeds of varying heights were poppy blue on three sides, bright orange on the fourth and oriented in the same direction.

“Walking down the paths created a chromatic experience, as though you were in a real, blooming garden but compressed in time,” he says, “Like Frederick Law Olmstead who did Central Park and Parc Mont Royal, Blue Stick Garden was based on the Victorian period’s notion of experiencing the landscape by moving through it.”

Two years later Blue Stick Garden showed again in Toronto at Canada Blooms, an annual flower and garden show. The flower- and plant-less installation caused a ruckus. “When you push the limits and when the thing becomes controversial, I think it’s always a good sign because it means that you’re right on it,” Cormier says.

Cormier’s meteoric rise has thrust him into an entirely new orbit of multi-acre and million-square-foot developments. Yet the fundamentals remain the same. “We’ve kept this attitude that landscape architecture may be a fun thing; a sustainable thing or ecological thing but it must have aesthetics, meaning and sensibility,” he says, reasserting his firm’s design touchstones. Cormier also attributes his firm’s success to its singular focus, “We’re always trying to tap into the idea of doing just one thing per project, just one. If you try to do too much you miss it and it just becomes noise,” he explains.

It was impatience that led Claude Cormier, who studied plant breeding, landscape architecture and the history and theory of design, to begin working with inanimate elements. “If you wait for flowers to do something good or great you’re going to wait three, four or five years.”
“I don’t have a garden,” Cormier says, during the question and answer period, provoking yet another eruption of laughter. A case of the garden-less landscape architect, the tidbit ended the occasion on a high note.

Claude Cormier
Principal, Claude Cormier + Associés
Claude Cormier has built an internationally recognized office in Montréal that calls itself a “Landscape Architecture – Urban Design” firm. His practice extends far beyond the conventional realm of traditional landscape design to forge bridges between urban design, public art and architecture, resulting in such wonderful urban spaces as Sugar Beach and HTO Park in Toronto, and Place d’Youville, TOM and Pink Balls in Montreal.