Rojkind and the chocolate factory

“Clients who go for the most daring designs are usually in the biggest rush,” says Michel Rojkind. His firm, Rojkind Arquitectos, recently completed the first phase of a Kubrikian chocolate museum. Located southwest of Mexico City, the futuristic building fronts Swiss food giant Nestlé’s nondescript factory. The 634-square-meter structure features a 300-meter-long façade made up of folding planes in deep red corrugated steel. The architects designed and built it at warp speed– in just two and a half months– and a battalion of 240 construction workers and Rojkind’s project team toiled around-the-clock dividing the days into three eight-hour shifts.

For full text, continue below. 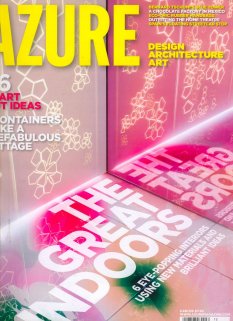 Politics were to blame for the hasty design and construction: a ribbon-cutting inauguration date had already been set. “When they told me to timeline, I said, “That’s crazy!” says Rojkind, “But that’s how Mexico is– timelines are always very compressed, very ‘do it now.'” Right after breaking ground, construction at the highway-side industrial corridor near Toluca outpaced the studio’s ability to draft the technical blueprints so the architects descended on the site with sketch pads in hand to complete the design in an ad hock manner.

Initially Nestlé’s design competition was for a much smaller undertaking: an elevated catwalk inside the existing factory where visitors would overlook the various stages of chocolate production. “I suggested that Nestlé needed more than a tunnel; it needed to create an expectation for kids and talk about the company at the same time. We decided it would become a chocolate museum, so there’s an interesting crossover into culture.”

Sitting on concrete pillars, the snaking structure hovers above a landscaped green space. The façade’s angular sides and polygon shape resemble those of a giant alebrije— traditional folk art of brightly painted wooden figurines. Rather than a plain doorway, the non-vertical entry is a gaping, forward-leaning portal with a gangway leading up to two flights of stairs. The stark lobby is an anteroom for the theater, where Nestlé screens sugar-coated propaganda on the history of chocolate. From the theater visitors move into the tunnel in the chocolate factory.

In terms of precedents Rojkind finds himself among distinguished company. “In Mexico, there’s no culture around  industrial design,” one of a handful of exceptions being the Bacardi office by Mise Van der Rohe. “Driving through the industrial core was depressing. All these buildings looked the same: grey, awful and generic. Imagine kids on a school bus. They’d be bored. I was bored, and I’m 37,” says Rojkind, “I wanted to create something to ignite kids’ imaginations– something playful and dynamic, like they’re arriving at a space ship.”