St. Laurent is brilliant, but is it art?

The Société de développement du boulevard Saint-Laurent sidestepped any holiday controversy this year by flipping the switch on 65 energy-efficient LED installations attached to lampposts between Sherbrooke St. and Mt. Royal Av. Instead of the usual, overplayed holiday symbols, they paid a pretty penny opting for a unique, locally, designed, and semi-permanent decor that’s year-long, secular, abstract, minimalist and digital.

But is it art? 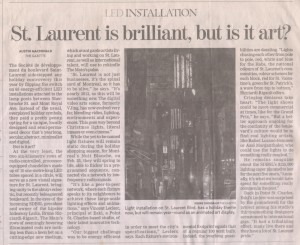 At the very least the two, six-kilometer rows of radio-controlled, processor-equipped chandeliers made up of 10 one-meter-long LED tubes spaced in a circle, will serve as a new visual signature for St. Laurent, bringing unity to the always eclectic, but recently beleaguered boulevard. In the eyes of the incoming SDBSL president and owner of hipster hideaway Laika, Bruno Riccardi-Rigault,  The Main’s rows of seemingly hovering illuminated rods are nothing less than a keen bet on a cutting edge new medium which avant garde artist living and working on St. Laurent, as well as international talent, will use to rekindle The Main’s pulse.

“St. Laurent  is not just businesses, it’s the spinal cord of Montréal so it has to be alive,” he says “It’s nearly 2012, so this will be something new. The digital video arts scene, formerly VJing, has now evolved very far, blending video, lighting, environments and experiences. This goes  way beyond Christmas lights, literal images or even cinema.”

While these yet-to-be named light fixtures will remain static during the holiday shopping season, for Montréal’s Nuit Blanche on February 25, they will spring to life, able to flicker in a programed sequence, connected via a network by low-frequency radio signals. “It’s like a peer-to-peer network where each fixture speaks to its neighbours to achieve these large-scale lighting effects and animation,” says Vincent Leclerc, principal at Eski, a Pointe-St.-Charles-based studio, of their latest innovative technology.

“Our biggest challenge was to be energy efficient in order to meet the city’s specifications,” Leclerc says. Each fixtures environmental footprint equals that of  regular 100 watt bulb.

Indeed the year-long possibilities are dazzling. “Lights chasing each other from pole to pole, red white and blue for the Habs, the national colors St. Laurent’s communities,  color schemes for each block, red for St. Valentines, Green for St. Patrick’s, a wave from top to bottom,” Riccardi-Rigault offers. Cringing sins take heart: “The light shows could be more commercial at times, like for the Grand Prix,” he says, “But a better approach ongoing for the continuity of the boulevard’s culture would be to find real lighting artists like Rafael Lozano-Hemmer or Alex Morganthaler who could use the lights to do something really magical.”

He remains sanguine about the SDSL’s $125,000 lighting caper planned to last for the next five years. “Annually, it’s what we would have spent for something really common in the past.”

Back in Point-St.-Charles Eski’s Leclerc was surprised by the groundswell for the project among his studios thirty-something designers accustomed to international gigs. “It had a tribalizing effect, many live there and have a lot of St. Laurent pride.”