See full texts below the slideshow. 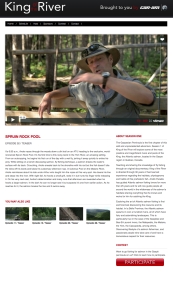 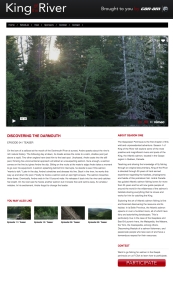 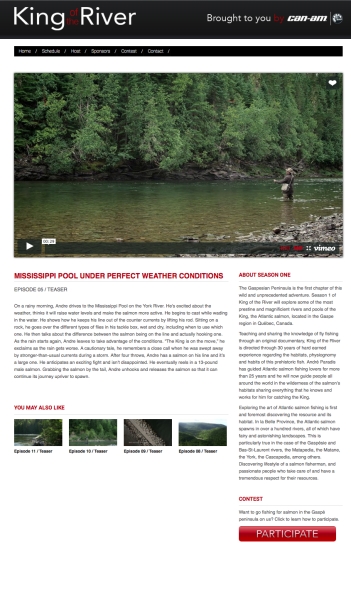 It’s dawn on the first day of the sport fishing season and Andre’s excitement is palpable. The conditions are perfect. He makes his way through the dense brush to White House Pool on the York River and checks his gear. His growing sense of the matter is that there are close to 100 fish in the water nearby. He steps into the river, sizes the currents and devises a game plan. Quickly, his anticipation’s rewarded: fish on! Yet, his first catch fights its way off the hook, leaving Andre to cope with a rush of adrenaline. His next spot along the York River is The Gorge. He makes his way along the craggy rocks, peering into the water to see if there are any waiting salmon. After sweeping the pool with a wet fly he catches two brook trout which he gladly keeps for dinner. Back at White House Pool, Andre has calmed his nerves enough to cast his line into the water for a second pass. In no time at all, he’s engaged in another epic fight. It turns out to be an 18-pound female salmon. He returns the fish to the water. “Great action!” he exclaims.

It’s 6:30 a.m., Andre races through the woods down a dirt trail on an ATV, heading to the exclusive, world-renowned Spruin Rock Pool. It’s his first time to this rocky bend in the York River, an amazing setting. From an outcropping, he begins his first run of the day with a wet fly, jerking it away quickly to entice his prey. While sitting on a bench discussing salmon, fly-fishing technique, a salmon breaks the water’s surface with its back. Crouching, Andre sneaks back to the shoreline with his rod but the fish doesn’t bite. He kicks off his boots and takes his customary afternoon nap. At Lebreux Pool on the Matane River, Andre reminisces about his late uncle Arthur who taught him the ropes at this very spot. He cleans his line and steps into the river. With night fall, he hooks a small grill, reels it in but hurts his finger while releasing it. On his very next cast, Andre’s determination and many runs that afternoon are rewarded when he hooks a larger salmon. In the dark he can no longer see it but suspects it’s one from earlier action. As he reaches for it, the salmon breaks the line and it swims away.

EPISODE 03,FROM SAINT-JEAN TO YORK RIVER
It’s 4:30 a.m., Andre’s driving along the St. Jean River. At Little Indian Pool, he surveys the long trench with a swift current and decides to work the pool using a wet fly. He puts on his waders and boots and begins to fish from a rocky embankment. He gets no action, decides to leave and drives his ATV across a suspension bridge. At Bluff Pool, Andre’s joined by Ben who counts the salmon in the Gaspé’s three largest rivers and determines the seasonal quotas. In wetsuits with snorkels, Ben and Andre swim down one side of the pool. It’s harder than it looks, each one comes up with a different number. At White House Pool on the York River, Andre reveals his fishing strategy. He decides to change flies, due to the wind. It ends up being the right decision, three salmon come on the fly but he fails to hook one. Andre cries out in frustration. On a subsequent cast, he reels in an 18-pound male after a 15-minute fight. Andre gives careful instructions on how to release a salmon properly. For this catch, he had used a hand-made fly which was a gift from a wily river guide.

EPISODE 04,DISCOVERING THE DARTMOUTH
On the bow of a sailboat at the mouth of the Dartmouth River at sunset, Andre speaks about the river’s rich natural history. The following day at dawn, he treads across the rocks to a calm, shallow pool just above a rapid. Two other anglers have beat him to the best spot. Unphased, Andre casts into the still pool, thinking his unconventional approach will attract an unsuspecting salmon. Sure enough, a salmon comes on the line but gives Andre the slip. Sitting on the rocks at the water’s edge Andre takes a moment to go over his equipment. A salmon splashing behind him interrupts, he stands to see if this salmon “wants to talk.” Later in the day, Andre’s stretches and dresses his line. Back in the river, he works this way up and down the pool. Finally he hooks a salmon and an epic fight ensues. The salmon breaches three times. Eventually, Andre reels in the 15-pound male. He releases it back into the river and catches his breath. On his next cast he hooks another salmon but it breaks free and swims away. An amateur mistake. In his excitement, Andre forgot to change the leader.

EPISODE 05, MISSISSIPPI POOL UNDER PERFECT WEATHER CONDITIONS
On a rainy morning, Andre drives to the Mississippi Pool on the York River. He’s excited about the weather, thinks it will raise water levels and make the salmon more active. He begins to cast while wading in the water. He shows how he keeps his line out of the counter currents by lifting his rod. Sitting on a rock, he goes over the different types of flies in his tackle box, wet and dry, including when to use which one. He then talks about the difference between the salmon being on the line and actually hooking one. As the rain starts again, Andre leaves to take advantage of the conditions. “The King is on the move,” he exclaims as the rain gets worse. A cautionary tale, he remembers a close call when he was swept away by stronger-than-usual currents during a storm. After four throws, Andre has a salmon on his line and it’s a large one. He anticipates an exciting fight and isn’t disappointed. He eventually reels in a 13-pound male salmon. Grabbing the salmon by the tail, Andre unhooks and releases the salmon so that it can continue its journey upriver to spawn.

EPISODE 06, VISIT ON THE WILD MADELEINE
On the Madeleine River, Andre’s standing at the bottom of a 75-foot waterfall, near the ruins of a early-20th-Century paper mill. In the past the falls stopped the salmon from moving further upriver, until 50 years ago when an engineer built a migratory pass for the salmon to swim further upstream. Today, it’s the world’s longest underground salmon pass and 1,200 salmon make the climb annually. Andre drives his ATV to Petite Ferme Pool to fish but doesn’t get any action. The next morning, surveying the same pool Andre explains about how the forces of nature alter the landscape and how he has to adapt his fishing spots from year to year. At Bebe Pool, Andre spots a large salmon near a rock. His hunch is that the salmon will be active later on in the evening and he skulks away in order to avoid being seen. Andre prepares his dry fly by greasing it. After several casts: fish on! Andre discovers just how big the salmon is after it jumps out of the water. Pulled by the salmon, he runs down the rocky shoreline. Eventually after a wild fight, the salmon tires and Andre reels it in completely in order to release it.