Montreal architect Jean-Maxime Labrecque has a way with the monolith

Like an ascetic monk, Jean-Maxime Labrecque, the principal of Montreal-based INPHO Architecture Physique et d’Information, speaks in hushed, solemn tones about his architecture. His firm’s oblique, sculptural minimalism – reminiscent of Donald Judd but actually inspired by Soviet Constructivism – represents a zealous quest for a transcendent absolute, which invariably amounts to a botched vanishing act. He cites Kasimir Malevichs’ White on White, a 1918 abstract oil painting, as the most important work of the 20th century and most emblematic of his self-effacing, architectural philosophy that uses monoliths as the building blocks. 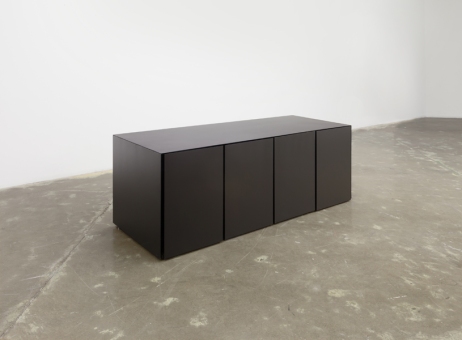 “Using monoliths is quite common among architects, but I want to make it systematic in all my work,” says Labreque. Sculpture Habitable, his 2011 composition of 11 monoliths, generated a flurry of interest. Then at New York’s Wanted Design in early 2013, he introduced Variable Hidden-Function Monolith, a furniture series of three standalone, nearly seamless rectangular cuboids (eight feet long, 32 inches wide, and 32 inches high) that transform into a brushed-aluminum living room; a smoked-glass dining room; and  a painted-plywood workstation. Says Labrecque, “If I could only work with functional monoliths like these for the rest of my days – but even more thought-out and radical – I would be so happy.”

For these prototypes, now in their third generation, the devil was in the details, specifically, working with a highly skilled supplier for each type of material, creating the perfect joints that sub-divide the monoliths into their separate functional modules: “I called the first ones 12 Lines, because that’s what’s initially visible to the naked eye.”

The tops and sides of the plywood workstation’s outer surfaces have 45-degree cuts, making the monolith’s joints almost invisible, resulting in the most perfect and uninterrupted form of the three. “A conventional counter and cabinet have three breaks instead of one,” he offers by comparison. “Each detail you add tends to multiply the number of lines in an object.”

By his own admission, Labrecque’s first prototypes were more akin to museum pieces, all the joints glued or welded, and ill suited to fit through standard doorways. For their latest iteration, the monoliths feature fixtures, adjustable feet and other hardware so they can could be more easily adjusted, disassembled and transported. A lead from Wanted Design may result in Labrecque’s first sale. “A decorator’s interested in the dining room, but with only six chairs instead of eight,” he says, furrowing his brow momentarily at the rigours of the open market, “I chose eight feet, simply for its elegance, but if I want to share my work I will have relax my principals some.”

For Labrecque, his self-immolation is a Tao of self-discovery: “Architecture must be an act of modesty, reducing itself to a minimum, leaving as much as possible to a space’s light, volume and occupants. Undistracted by superfluous objects, dress or ornament, people must face their own selves.”